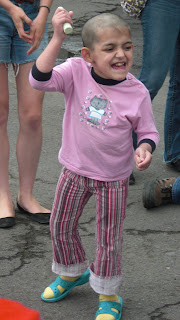 I haven't posted anything to this blog since 2008. It's time to pick it up again.

As I write this, I am sitting in a large lobby in a Soviet-style hotel in Transcarpathia, the western-most oblast (state) in post-Soviet Ukraine. It's like every lobby in the innumerable Soviet-era hotels in which I have slept across the former USSR. It's stuffy and the wood parquet floor is worn. The old carpets have seen the feet of many Communist party officials. The plants are scraggly and have probably been here since Kruschev's time. The furniture has likely been here since the heyday of the Soviet Union and everything looks like every other place I have visited. It's a creepy, homey kind of feeling. The thunder is pounding, and the rain is relentless. From my seat, I can see the foothills of the Carpathian Mountains, along with several golden domes of beautiful Orthodox churches scattered about the ancient city of Uzhgorod.

How did I get here? I am 52 years old, and I am in Eastern Europe with 15 students, my wonderful wife, Jeannie, and my amazing daughter, Hannah. (Actually, they are off with the group today, while I stay at the hotel with a nauseous team member. He is not nauseous; his stomach is nauseous!) My oldest son, Jonathan, is also on the European continent, probably enjoying the summer-welcoming Solstice festivities in Latvia. My third son, Scotty, is home in Oregon with his wife, Annie, working hard towards completion of his political science degree at OSU. My third son, Jeremy, is in Japan, diligently studying at Tokyo’s Waseda University.

So, how did I get here? What are the twists and turns that have brought me to this day? I really cannot explain, nor do I understand all of the events that have led to June 20, 2010; but I can tell you that I am a blessed man. I can tell you that loving and trusting the Father is an adventure that I would never trade for some brief and fleeting pleasure of the flesh. I can look back over the decades and see God’s faithful hand guiding and directing my path to this point. I can tell you about now.

I can tell you about the events of yesterday, when we traveled many hours up into the Carpathian Mountains to a home where disabled and disfigured people were hidden away from eyes searching for the utopian vision promised by the machine of the Soviet Union. I can consider the joy that came from dancing with crooked little Ebolia, seeing her smiles, and wondering why I was granted the privilege of experiencing such a moment in a place so far removed from general society that most people on earth will never even be aware that such a place exists. Why did I get to do that? I cannot answer that question beyond acknowledging that God’s grace paves the way.

So, how did I get to Ukraine, sitting in a hotel room overlooking a beautiful and ancient city? I guess it happened as I tried to follow and know God. I guess it happened by His grace. I really don’t know all of the reasons why I have been allowed to live the life I have been given. I guess I will just do my best to love and follow the Creator of the universe by loving people and following His Word. I guess that works.
Posted by Stevie the Vagabond... at 6:38 AM 4 comments: